After discreetly having pre release album cuts played on the UK’s pirate jazz funk and soul stations, IMAGINATION , with their charismatic lead singer, LEEE JOHN burst onto the scene in May 1981, when their debut single ‘Body Talk’ entered the UK Charts at #68, with it peaking at #4 on 18 th July 1981, having gained momentum after their momentous and unforgettable debut performance on BBC One’s Top Of The Pops on 4 th June 1981.

In the period 1981 1983, IMAGINATION had hits in almost 30 countries around the world, with very high popularity across Europe, especially in France, Italy, Benelux and Germany, whilst also appearing in the Billboard US Dance and R&B Charts on a regular basis in the throughout the ‘80s. They really were a internationally successful British group, earning numerous Platinum, Gold and Silver discs, for hit singles ‘ Flashback’ In And Out Of Love’ Love’, the much sampled ‘Just An Illusion’ and ‘Music And Lights’, ‘New Dimension’,,‘State Of Love’,,‘Looking At Midnight’ and ‘Thank You My Love’ and albums BODY TALK , IN THE HEAT OF THE NIGHT , SCANDALOUS , NIGHT DUBBING , CLOSER and LIKE IT IS IMAGINATION worked with legendary producers Tony Swain/Steve Jolley , Arthur Baker , Nigel Wright Preston Glass , Nick Martinelli and Ron ‘Have Mercy’ Kersey , and had tracks remixed by David Morales , Frankie Knuckles , Mike Pickering , Graeme Park , Victor Simonelli and Larry Levan “40 YEARS” is a career encompassing retrospective of IMAGINATION ’s and LEEE JOHN ’s recorded music output, with 189 tracks across 17CDs, including all of their studio albums from 1981’s BODY TALK up until 2016’s RETROPIA. “40 also features a 2 disc collection of Unreleased Trax, Mixes & Demos , a 2 disc collection of alternate and unreleased mixes from CLOSER in Closer Revisited , a Live Trax disc from several shows spanning the decades and a disc of extended versions in 12” Singles Selection 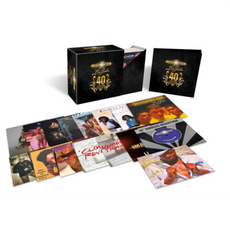